Cultural Discussion and Advice From A Fellow Student

Drinking Tea in the Arab World and Navigating Cultural Differences

While coffee is a popular choice of drink in the Middle East for residents as well as tourists, tea is most commonly drank on a day-to-day basis and holds cultural importance in many countries. It’s customary to be offered a cup of tea when you enter someone’s home, sit down, greet neighbors, or even when visiting a tourist attraction. You could be walking down the street and a random tea vendor, store vendor, or citizens will insist you sit down and drink with them. It’s a way of creating connections, relaxing with friends and family, and welcoming people into their culture. Thus, tea has become a symbol of Arab hospitality.

Tea is had and offered at all times of the day, it’s often served before and after meals and during get-togethers. Most Arabs will end up drinking several cups of tea throughout the day. While tea is popular in big cities, cultural traditions surrounding tea originate from Bedouin communities. Returning from a long day of work in the desert, Bedouins will take a break by boiling tea over a wood fire, a technique called Shai Al Hatab. This is considered the best way to make tea, as it produces a more distinct and strong flavor. If you go on an excursion into the desert or to a Bedouin camp, you will most likely enjoy Shai Al Hatab during sunset while sitting on top of a sand dune. Furthermore, tea is traditionally served during the Muslim holy month of Ramadan. During Ramadan, Muslims can’t eat or drink from sunrise to sunset. However, during Iftar, a meal that is eaten by Muslims after sunset, tea is served throughout the evening with a variety of Arab sweets. 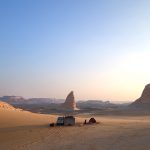 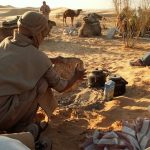 a Bedouin making tea in the sand 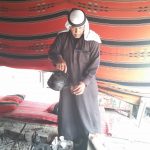 A Bedouin pouring tea in a traditional tent 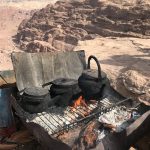 Steeping tea over the fire allows for a richer flavor

Yet, while all Arab societies enjoy tea during get-togethers and holidays, each society has its own variety. Cardamom tea is the most popular tea in the entirety of the Arab world and is known for aiding digestion. For this reason, cardamom tea is often served before meals to prepare your digestive system for those carb-heavy Arab dishes. You’ll especially find cardamom tea in Bedouin culture, where mint tea is mixed with cardamom to create a distinct flavor. This tea is often served in a small bowl-like cup called a finjan. Karkadeh or hibiscus flower tea is the most famous herbal tea in Egypt and is known for being both sour and sweet. Moroccan mint tea is a traditional green tea made from spearmint leaves and sugar. This type of tea is popular in North African countries such as Morocco, Algeria, Tunisia, and Libya. Not to be confused with Morrocan mint tea, mint tea made from mint leaves is popular in the Levant region. This region includes Jordan, Syria, Lebanon, and Palestine. This tea is commonly served during get-togethers or sitting in front of the house with family and friends late into the night. Finally, black tea is the most common tea that you’ll see in stores and is especially popular in the Gulf region. 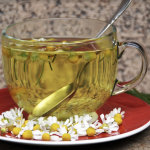 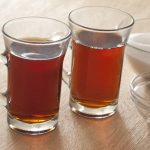 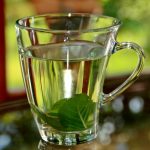 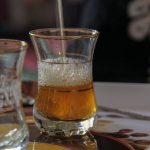 As students traveling from the United States to the Middle East, it can be daunting to be offered tea all the time. Especially since tea doesn’t have the same symbolic meaning in the U.S as it does in Arab countries. I remember one day when I was walking down the streets of Amman, Jordan, I stopped and asked two men where I could find a tea shop. It turns out that the building right in front of me, which had no labels or signs, was a hole-in-the-wall tea and coffee shop. The two men- who turned out to be the owners-immediately offered me a cup and had me sit down. I was super nervous and scared at first, but those feelings quickly faded. I sat in front of that tea shop for what felt like hours, just talking to the two men and other locals that came in. Everyone was so genuinely welcoming and wanted to make sure I had the best Jordanian experience. When I finally got up to leave, I asked the owners how much the tea was and they told me not to worry about the price. I was shocked and uncomfortable, how could they just give up their time and product for free? This is when I realized the extent of Arab hospitality and what sitting down and having a cup of tea really means. While I don’t usually recommend going into random shops that aren’t labeled, the story serves to demonstrate that being offered tea is a sign of respect and hospitality that Arabs take very seriously. It’s the experience and the people that you meet over a cup of tea that matters, not the tea itself.

As a study abroad student, you may face a similar experience that will put you in an unfamiliar situation. As such, I will provide some suggestions that may help to navigate through cultural differences. For instance, some students may not like tea and coffee or are not able to drink them for religious reasons, resulting in them feeling uncomfortable saying no. In this case, I would suggest keeping an open mind and communicating with those around you. Your hosts will not be offended if you tell them you don’t like something or that you can’t drink it for religious purposes. They may be confused at first, but it is always important to be honest and to try to communicate. For example, when I first arrived in Jordan, my host mom would make me tea any time I sat down. At first, I felt bad because I didn’t like how sweet the tea was, so I often left my glass half full. However, after asking my host mom if she could make me tea without sugar, I found I liked it a lot better! As I began to drink more and more, tea became a staple in my day-to-day life and I learned what types of tea I liked and what types I didn’t. I would highly suggest trying different types of tea and buying the ones that you like. Tea makes a great gift to bring back for family or friends and can be found at any major supermarket. You can also buy unique homemade tea blends at souks or Friday markets. It’s cheap, easy to transport, flavourful, and is just overall better than any tea I have ever had in the U.S.

Overall, tea is steeped in a rich tradition of Arab hospitality and there are many different types of tea across the Middle East. As students, it’s important to be aware of the importance of tea in creating connections, but also don’t be afraid to speak up if you have dietary preferences or if you want to try something new. Plus, if you don’t end up liking tea, coffee is always a great option too! Finally, as they in Jordan, صحتين, or enjoy your tea! 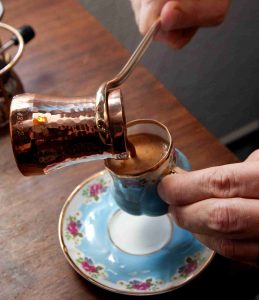 Food Around The Arab World

Check out the following map where you can click on different Middle Eastern countries and find out what the most famous dishes in that country are. Maybe you’ll feel inspired to take a trip to try out all the amazing dishes offered!

11. Writing about Saudi Arabia’s culture of food, I see now that coffee is more preferable. It is also so important to serve the Saudi coffee to the guests with some dates and sweet/Dessert. Tea is usually served after the meal. Either lunch or dinner.

12. The ways that Muslims eat and drink come from Islam.

Study Materials for Arabic Students by an Arabic Student by Grace Hall via the Boise State Pathways Project is licensed under a Creative Commons Attribution-NonCommercial-ShareAlike 4.0 International License, except where otherwise noted.