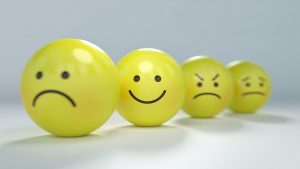 “Labeling your emotions provides useful information. Your emotions become beacons, helping you identify what you care about most and motivating you to make positive change.” Susan David

Emotions play many important roles in people’s lives and have been the topic of scientific inquiry in psychology for well over a century (Cannon, 1927; Darwin, 1872; James, 1890). This module explores why we have emotions and why they are important. Doing so requires us to understand the function of emotions, and this chapter does so below by dividing the discussion into three sections. The first concerns the intrapersonal functions of emotion, which refer to the role that emotions play within each of us individually. The second concerns the interpersonal functions of emotion, which refer to the role emotions play between individuals within a group. The third concerns asserting your emotions. All in all, we will see that emotions inform us of who we are, what our relationships with others are like, and how to behave in social interactions. Emotions give meaning to events; without emotions, those events would be mere facts. Emotions help coordinate interpersonal relationships.

Emotions are rapid information-processing systems that help us act with minimal thinking (Tooby & Cosmides, 2008). Problems associated with birth, battle, death, and seduction have occurred throughout evolutionary history and emotions evolved to aid humans in adapting to those problems rapidly and with minimal conscious cognitive effort. If we did not have emotions, we could not make rapid decisions concerning whether to attack, defend, flee, care for others, reject food, or approach something useful, all of which were functionally adaptive in our evolutionary history and helped us to survive. For instance, drinking spoiled milk or eating rotten eggs has negative consequences for our welfare. The emotion of disgust, however, helps us immediately take action by not ingesting them in the first place or by vomiting them out. This response is adaptive because it aids, ultimately, in our survival and allows us to act immediately without much thinking. In some instances, taking the time to sit and rationally think about what to do, calculating cost–benefit ratios in one’s mind, is a luxury that might cost one one’s life. Emotions evolved so that we can act without that depth of thinking.

Emotions prepare us for behavior. When triggered, emotions orchestrate systems such as perception, attention, inference, learning, memory, goal choice, motivational priorities, physiological reactions, motor behaviors, and behavioral decision making (Cosmides & Tooby, 2000; Cosmides & Tooby, 2008). Emotions simultaneously activate certain systems and deactivate others in order to prevent the chaos of competing systems operating at the same time, allowing for coordinated responses to environmental stimuli (Levenson, 1999). For instance, when we are afraid, our bodies shut down temporarily unneeded digestive processes, resulting in saliva reduction (a dry mouth); blood flows disproportionately to the lower half of the body; the visual field expands; and air is breathed in, all preparing the body to flee. Emotions initiate a system of components that includes subjective experience, expressive behaviors, physiological reactions, action tendencies, and cognition, all for the purposes of specific actions; the term “emotion” is, in reality, a metaphor for these reactions.

One common misunderstanding many people have when thinking about emotions, however, is the belief that emotions must always directly produce action. This is not true. Emotion certainly prepares the body for action; but whether people actually engage in action is dependent on many factors, such as the context within which the emotion has occurred, the target of the emotion, the perceived consequences of one’s actions, previous experiences, and so forth (Baumeister, Vohs, DeWall, & Zang, 2007; Matsumoto & Wilson, 2008). Thus, emotions are just one of many determinants of behavior, albeit an important one.

Emotions are also connected to thoughts and memories. Memories are not just facts that are encoded in our brains; they are colored with the emotions felt at those times the facts occurred (Wang & Ross, 2007). Thus, emotions serve as the neural glue that connects those disparate facts in our minds. That is why it is easier to remember happy thoughts when happy, and angry times when angry. Emotions serve as the affective basis of many attitudes, values, and beliefs that we have about the world and the people around us; without emotions those attitudes, values, and beliefs would be just statements without meaning, and emotions give those statements meaning. Emotions influence our thinking processes, sometimes in constructive ways, sometimes not. It is difficult to think critically and clearly when we feel intense emotions, but easier when we are not overwhelmed with emotions (Matsumoto, Hirayama, & LeRoux, 2006).

Because emotions prepare our bodies for immediate action, influence thoughts, and can be felt, they are important motivators of future behavior. Many of us strive to experience the feelings of satisfaction, joy, pride, or triumph in our accomplishments and achievements. At the same time, we also work very hard to avoid strong “negative” feelings; for example, once we have felt the emotion of disgust when drinking the spoiled milk, we generally work very hard to avoid having those feelings again (e.g., checking the expiration date on the label before buying the milk, smelling the milk before drinking it, watching if the milk curdles in one’s coffee before drinking it). Emotions, therefore, not only influence immediate actions but also serve as an important motivational basis for future behaviors.

Emotions are expressed both verbally through words and nonverbally through facial expressions, voices, gestures, body postures, and movements. We are constantly expressing emotions when interacting with others, and others can reliably judge those emotional expressions (Elfenbein & Ambady, 2002; Matsumoto, 2001) thus, emotions have signal value to others and influence others and our social interactions. Emotions and their expressions communicate information to others about our feelings, intentions, relationship with the target of the emotions, and the environment. Because emotions have this communicative signal value, they help solve social problems by evoking responses from others, by signaling the nature of interpersonal relationships, and by providing incentives for desired social behavior (Keltner, 2003).

Because facial expressions of emotion are universal social signals, they contain meaning not only about the expressor’s psychological state but also about that person’s intent and subsequent behavior. This information affects what the perceiver is likely to do. People observing fearful faces, for instance, are more likely to produce approach-related behaviors, whereas people who observe angry faces are more likely to produce avoidance-related behaviors (Marsh, Ambady, & Kleck, 2005). Even subliminal presentation of smiles produces increases in how much beverage people pour and consume and how much they are willing to pay for it; presentation of angry faces decreases these behaviors (Winkielman, Berridge, & Wilbarger, 2005). Also, emotional displays evoke specific, complementary emotional responses from observers; for example, anger evokes fear in others (Dimberg & Ohman, 1996; Esteves, Dimberg, & Ohman, 1994), whereas distress evokes sympathy and aid (Eisenberg, Fabes, Miller, Fultz, Shell, Mathy, & Reno, 1989).

Emotional expressions provide information about the nature of the relationships among interactants. Some of the most important and provocative set of findings in this area come from studies involving married couples (Gottman & Levenson, 1992; Gottman, Levenson, & Woodin, 2001). In this research, married couples visited a laboratory after having not seen each other for 24 hours, and then engaged in intimate conversations about daily events or issues of conflict. Discrete expressions of contempt, especially by the men, and disgust, especially by the women, predicted later marital dissatisfaction and even divorce.

Have you ever been so swept up in your emotions that you can’t think straight? Or to the point where you can’t even if we can’t exactly put a finger on how you are feeling?  Ever felt like you just don’t have the right words to describe what you are going through?  You aren’t alone. I often joke that feelings are the “f-word”, some of us love them, sometimes they make us uncomfortable, and they are only to be spoken in front of the right people.  A big part of being assertive includes understanding and expressing your feelings, not just what you want and need from others. Expressing our feelings can be challenging for a number of reasons, some of which we will explore now and some in later chapters. 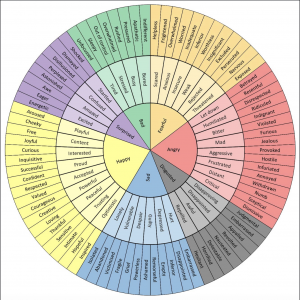 As you can see, there are a lot of words to describe our emotional vocabulary.  One of the worlds leading experts in emotions is Susan David (2016), here research in the book Emotional Agility tells us that we need to have an emotional vocabulary of at least 30 words in order to accurately experience, express, and ultimately work through our emotions.

More from Susan David in this wonderful TedTalk.

While sometimes asserting our emotions is challenging because of a lack of vocabulary, another reason is that we don’t know what to say or how to say it.  Remember back to Chapter 3 I-Statements and Framing and consider asserting your emotions like this:

“I am not sure how your will respond to this but I care about our relationship enough to want to share this and work on it together. (FRAME) I feel depressed. (I-Statement with a feeling).”

“This is a new experience for me. (Frame) I feel nervous. (I-Statement with a feeling)”

Understanding and asserting our emotions is important and challenging work.  Lisa Feldman Barrett is a Neuroscientist and Psychologist who also studies emotions.  Her research helps us understand that we are in control of our emotions, they aren’t in control of us. Take a look at her TedTalk below.

Material in this chapter has been adapted from “Together:The Science of Social Psychology – Functions of Emotions” by Hyisung Hwang, David Matsumoto is licensed under CC BY-NC-SA 4.0