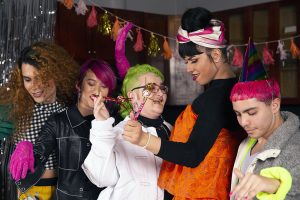 “Let’s stop ‘tolerating’ or ‘accepting’ difference, as if were so much better for being different in the first place. Instead let’s celebrate difference, because in this world it takes a lot of guts to be different.”  Kate Bernstein

Before we discuss gender in detail, it is important to understand what gender actually is. The terms sex and gender are frequently used interchangeably, though they have different meanings. In this context, sex refers to the biological category of male or female, as defined by physical differences in genetic composition and in reproductive anatomy and function. On the other hand, gender refers to the cultural, social, and psychological meanings that are associated with masculinity and femininity (Woods & Eagly, 2002). You can think of “male” and “female” as distinct categories of sex (a person is typically born a male or a female), but “masculine” and “feminine” as continuums associated with gender (everyone has a certain degree of masculine and feminine traits and qualities).

Beyond sex and gender, there are a number of related terms that are also often misunderstood. Gender roles are the behaviors, attitudes, and personality traits that are designated as either masculine or feminine in a given culture. It is common to think of gender roles in terms of gender stereotypes, or the beliefs and expectations people hold about the typical characteristics, preferences, and behaviors of men and women. A person’s gender identity refers to their psychological sense of being male or female. In contrast, a person’s sexual orientation is the direction of their emotional and erotic attraction toward members of the opposite sex, the same sex, or both sexes. These are important distinctions, and though we will not discuss each of these terms in detail, it is important to recognize that sex, gender, gender identity, and sexual orientation do not always correspond with one another. A person can be biologically male but have a female gender identity while being attracted to women, or any other combination of identities and orientations.

Historically, the terms gender and sex have been used interchangeably. Because of this, gender is often viewed as a binary – a person is either male or female – and it is assumed that a person’s gender matches their biological sex. This is not always the case, however, and more recent research has separated these two terms. While the majority of people do identify with the gender that matches their biological sex (cisgender), an estimated 0.6% of the population identify with a gender that does not match their biological sex (transgender; Flories, Herman, Gates, & Brown, 2016). For example, an individual who is biologically female may identify as male, or vice versa.

In addition to separating gender and sex, recent research has also begun to conceptualize gender in ways beyond the gender binary. Genderqueer or gender nonbinary are umbrella terms used to describe a wide range of individuals who do not identify with and/or conform to the gender binary. These terms encompass a variety of more specific labels individuals may use to describe themselves. Some common labels are genderfluid, agender, and bigender. An individual who is genderfluid may identify as male, female, both, or neither at different times and in different circumstances. An individual who is agender may have no gender or describe themselves as having a neutral gender, while bigender individuals identify as two genders.

It is important to remember that sex and gender do not always match and that gender is not always binary; however, a large majority of prior research examining gender has not made these distinctions. As such, the following sections will discuss gender as a binary.

What are actual gender differences? In terms of language and language skills, girls develop language skills earlier and know more words than boys; this does not, however, translate into long-term differences. Girls are also more likely than boys to offer praise, to agree with the person they’re talking to, and to elaborate on the other person’s comments; boys, in contrast, are more likely than girls to assert their opinion and offer criticisms (Leaper & Smith, 2004). In terms of temperament, boys are slightly less able to suppress inappropriate responses and slightly more likely to blurt things out than girls (Else-Quest, Hyde, Goldsmith, & Van Hulle, 2006).

With respect to aggression, boys exhibit higher rates of unprovoked physical aggression than girls, but no difference in provoked aggression (Hyde, 2005). Some of the biggest differences involve the play styles of children. Boys frequently play organized rough-and-tumble games in large groups, while girls often play less physical activities in much smaller groups (Maccoby, 1998). There are also differences in the rates of depression, with girls much more likely than boys to be depressed after puberty. After puberty, girls are also more likely to be unhappy with their bodies than boys.

However, there is considerable variability between individual males and individual females. Also, even when there are mean level differences, the actual size of most of these differences is quite small. This means, knowing someone’s gender does not help much in predicting his or her actual traits. For example, in terms of activity level, boys are considered more active than girls. However, 42% of girls are more active than the average boy (but so are 50% of boys). Furthermore, many gender differences do not reflect innate differences, but instead reflect differences in specific experiences and socialization. For example, one presumed gender difference is that boys show better spatial abilities than girls. However, Tzuriel and Egozi (2010) gave girls the chance to practice their spatial skills (by imagining a line drawing was different shapes) and discovered that, with practice, this gender difference completely disappeared.

In the following sections, we’ll investigate gender roles, the part they play in creating these stereotypes, and how they can affect the development of real gender differences.

As mentioned earlier, gender roles are well-established social constructions that may change from culture to culture and over time. In American culture, we commonly think of gender roles in terms of gender stereotypes, or the beliefs and expectations people hold about the typical characteristics, preferences, and behaviors of men and women.

How do our gender roles and gender stereotypes develop and become so strong? Many of our gender stereotypes are so strong because we emphasize gender so much in culture (Bigler & Liben, 2007). For example, males and females are treated differently before they are even born. When someone learns of a new pregnancy, the first question asked is “Is it a boy or a girl?” Immediately upon hearing the answer, judgments are made about the child: Boys will be rough and like blue, while girls will be delicate and like pink. Developmental intergroup theory postulates that adults’ heavy focus on gender leads children to pay attention to gender as a key source of information about themselves and others, to seek out any possible gender differences, and to form rigid stereotypes based on gender that are subsequently difficult to change.

As noted above, most things we consider gender differences are really differences in our culturally constructed gender roles and gender stereotypes, not real differences based in gender or sex.  This is true in communication and conflict styles as well.  There are gender stereotypes that have us believe that women are more likely to avoid and men are more likely to compete in conflict situations (Davis, Capobianco, & Kraus, 2010). But the way people respond to conflict is based on individual variability, not on gender or sex.  It is important to watch out for how these gender stereotypes play out in our own lives, especially in conflict situations.  Do you find yourself attributing someones behavior to their gender identity? Do you find yourself behaving in ways that feel uncomfortable because you think that is how you “should” behave based on gender roles and gender stereotypes?

The TedTalk below from Audrey Mason-Hyde, Toilets, Bowties, Gender and Me is a wonderful look at Audrey’s personal experience gender. Audrey asks us to consider “Why does it matter to you if I am a girl or a boy?”

Material in this chapter has been adapted from“Psychology as a Social Science: Gender “ by Christia Spears Brown, Jennifer A. Jewel, and Michelle J. Tam is licensed under CC BY-NC-SA 4.0

Making Conflict Suck Less: The Basics by ashleyorme is licensed under a Creative Commons Attribution-NonCommercial-ShareAlike 4.0 International License, except where otherwise noted.